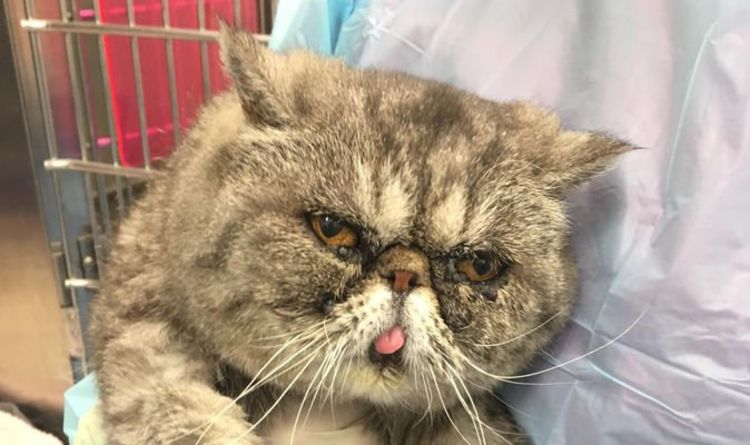 Boudicca the kitten was left with horrific injuries after dog attack (Image: RSPCA)

The rare female ginger kitten has been named after the ancient warrior queen because her iron will meant she did not succumb to near catastrophic injuries. Vets feared the four-month old kitten would never recover when she was brought into an animal hospital after her head was crushed in the dog’s jaws. Despite being in pain and close to death, tiny Boudicca defied the odds and will soon make a wonderful pet.

and I should know White and black mother cat rescued with kittens from busy London Underground station (Image: RSPCA)Four black and white kittens were saved by luck last month after being dumped like rubbish in a cardboard box near bins in Scafell Drive, Birmingham.

A series of images released by the RSPCA show how Boudicca has made a remarkable recovery over the past three weeks since arriving at the charity’s Putney Animal Hospital in a critical condition after being badly bitten at her previous home.

Joanne Elmes, RSPCA Putney hospital administrator, said: “Poor Boudi was close to death and in a bad way when she came into the care of the hospital.

“She had fractures in her bottom jaw and her cheekbone as well as a bleeding eye. She was placed in an intensive care unit cage to recover. Pretty much all of her head, face and neck were affected so she must have been in a lot of pain.

“After a lot of care, she finally pulled through and, thankfully, isn’t showing any signs of long-term damage. It truly is amazing. She is such a special little survivor.”

Boudicca the kitten needed her jaw wired after dog attack (Image: RSPCA)Boudicca had fractures to her jaw and cheekbone (Image: RSPCA)

Because her treatment has gone so well, Boudicca has been transferred from the RSPCA hospital to its Southall cattery in Hounslow where she continues to be treated. At present, Boudicca still has a wire in her jaw to ensure it heals correctly but she can be rehomed once this has been removed. Boudicca is a rare example of a female ginger cat.

Ms Elmes added: “We were so worried she wouldn’t pull through but then all of a sudden she started to get better and she was determined to run around the ward and just be a normal kitten.”

Last week the RSPCA revealed how it is facing a kitten crisis, taking in three cats every hour as unwanted pets are abandoned and left to fend for themselves on the streets.

More than 90,000 cats have been rescued by RSPCA branches and centres over the last three years and, with the oncoming “kitten season” about to start, the charity is calling on potential owners to be wary of making snap decisions about taking on cats and then being unable to cope.

Over the next six months the number of rescues is expected to rise in line with the number of unwanted litters being born, creating an overpopulation crisis, the charity is warning.

Carrie Stones, the RSPCA’s Cat Population Control Manager, said: “With an average of 86 cats coming into our care every day and a peak in the number of abandoned cats reported to us in summer, this clearly highlights that the UK is facing a cat overpopulation crisis with so many cats ending up in rescue centres.

“We would always urge people to think about the long-term commitment that caring for a cat entails and avoid making a snap decision about whether to take on a cat or kitten, for example from family or friends or buying online.

“Sadly, we see so many litters of kittens dumped like rubbish in the summer months because often owners have made this quick decision and can no longer cope, or the kittens have been an unplanned litter and a shock to the owner of the moggy mum.’

For all the allure of having an adorable kitten as a pet, the reality is hard work and expense.

Ms Stones continued: “There is no denying that kittens look cute but the reality of caring for them can be hard work, time-consuming and costly.

“We, and other cat and vet organisations, believe the solution to this crisis is to neuter cats from four months old before they can become pregnant and therefore avoiding these unwanted litters.”