Ricky Gervais was one of the most outspoken critics of Tess Thompson Talley as thousands went on social media to vilify her for killing the 18 year old, 4,000lb giraffe which is on the world’s Red List of threatened species.

The award-winning British comedian was not only the showbiz critic of the picture of 37-year-old Ms Talley, who comes from Kentucky.

Will and Grace star Debra Messing described Talley on Instagram as a “disgusting, vile, amoral, heartless, selfish murderer” and told followers: “With joy in her black heart and a beaming smile she lies next to the dead carcass of a rare black giraffe in South Africa. Giraffes are the epitome of gentle giants.

“They glide across the plains, like liquid; awe inspiring creatures who spend their days eating leaves and caring for their young. How DARE she.”

Three photographs of Ms Talley appearing on social media show her in jeans and sunglasses with the giraffe’s neck draped over her shoulder and also her pointing up to the sky with a rifle in her left hand.

Reuters reported how American media had published a since-deleted post by the hunter on Facebook which read: "Prayers for my once in a lifetime dream hunt came true today! Spotted this rare black giraffe bull and stalked him for quite awhile.”

The hunt is said to have taken place in South Africa last summer.

Although giraffes were given a Vulnerable classification on the Red List of Threatened Species in 2016, they can still be legally hunted as trophies in South Africa. Across sub-Saharan Africa, giraffe numbers have decreased by nearly 40 per cent over the past three decades.

The United States Fish and Wildlife Service recently gave the go-ahead for big game trophies to be imported from Africa on a case-by-case basis after President Donald Trump reversed a previous ban.

President Trump’s sons, Donald Junior and Eric, were criticised for posing with animals they had killed in 2011, including a leopard, during the election run-in two years ago. 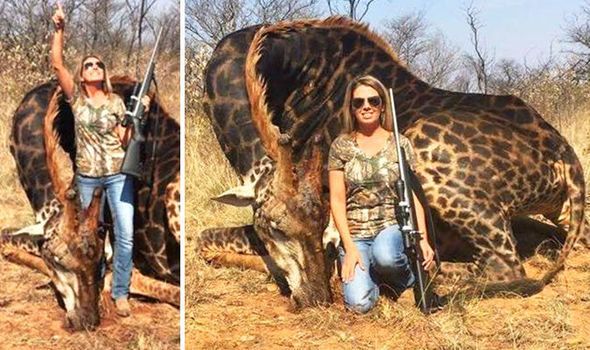 Defending the killing of the giraffe, Ms Talley told Fox News in an email how the animal had been too old to breed but had killed three younger bulls, leaving the herd’s population to decrease.

“This is called conservation through game management,” she explained.

“The giraffe I hunted was the South African sub-species of giraffe.

"The numbers of this sub-species is actually increasing due, in part, to hunters and conservation efforts paid for in large part by big game hunting. The breed is not rare in any way other than it was very old. Giraffes get darker with age.”