‘Hero’ dog chased away burglars threatening his owners in their home 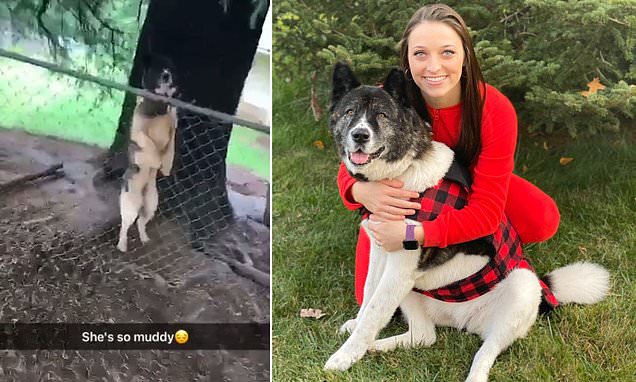 Meet Jenson Webster, two, and border collie mix Fenn. Don’t you dare call them a boy and his dog – Jenson will quickly correct you to say they’re brothers.

The pair are so close they do everything together, having grown up side by side.

Jenson was born on 8 October 2017, while Fenn being born just nine days later, on 17 October.

The family initially decided to get Fenn as a companion for their son, but never imagined how close the two would become.

Fenn has been by Jenson’s side for every milestone, even helping him out along the way.

Penelope has gained loads of fans online thanks to her ridiculous smile (Picture: CATERS NEWS AGENCY)Meet Penelope, a dog with a truly ridiculous smile.Mother-of-four Kayla, who is chronically ill, says Penelope has helped her get through many tough days with her smiles, ever since she got her as a puppy.

Stay-at-home mum Laura Webster, 29, taught Fenn to crawl so he could show Jenson what to do. Copying the dog allowed little Jenson to crawl at seven months and walk by eight.

Jenson also listened to orders such as sit and heel, and tried to eat by himself to be just like Fenn.

Laura said: ‘They are, simply put, siblings – it’s impossible not to love them and their amazing bond.

‘Fenn and Jenson were born nine days apart and they’ve literally grown up together – Jenson is recognised as the leader, but he’s decided to copy Fenn when he’s been learning things.

‘From eating food from the plate, just like Fenn would, he also joins him in learning tricks like sit, heel round.

‘They do the morning and night routine together – if Jenson is having his hair brushed, ready for the day ahead, then Fenn has to have his done too.

‘They’ll brush their teeth together, watch TV together with Jenson lying on top of Fenn, and every walk you’ll find Jenson there, right alongside Fenn.

‘Jenson has no human siblings and Fenn became his substitute – they’re best friends and completely inseparable.’

When Laura and her partner Tom Webster, a teaching assistant, captured video of Jenson and Fenn catching snow in their mouths, the clip was seen by 60,000 people who were stunned by the duo’s connection. ‘My dad and Jenson’s grandad, Steve Marlow, 64, is retired and came over to show Jenson the snow – he’d never seen it before,’ Laura explained. ‘Dad began to throw the snowballs for Fenn, and our older dog Nova to catch, and to our delight, Jenson tried the same

‘He seemed shocked because it was so cold when he caught it in his mouth.

‘He does the same with bubbles, he makes sure to mimic Fenn, and it does make us laugh and brightens everyone’s day.’

The close bond between the ‘brothers’ only has one drawback – Laura has to make sure Jenson doesn’t try to make friends with every dog he meets.

She says: ‘We know we can trust Fenn 100%, but we’ve had to make Jenson doesn’t go running up to every dog, thinking they’re all going to be like Fenn.

‘What he and Fenn have is so unique and special, we know we’re lucky to have it – our little boy really does have a furry sibling!’

Zippy the cockapoo lost use of his back legs after jumping off a sofa and slipping a disc (Picture: CATERS NEWS AGENCY)Jean, a part time lecturer, said: ‘It’s amazing to watch Zippy on his roller-skates and finally get some independence back.