Skiing pooch loves taking to the mountains with her owner

Dogs never fail to surprise and entertain us.

One impressive canine who has caught our attention is Akela – a skiing pooch who loves nothing more than taking on the snowy slopes. The German shepherd and husky mix is living her best life with her Scottish owner Ellie Crabb – who is currently on a working holiday in Alberta, Canada. Ellie, originally from Dundee, enjoys taking her four-legged friend skiing during her downtime. The former drama teacher adopted Akela when she was just one – knowing little about her background. But the canine – who is now four years old – surprised Ellie with her adventurous spirit. 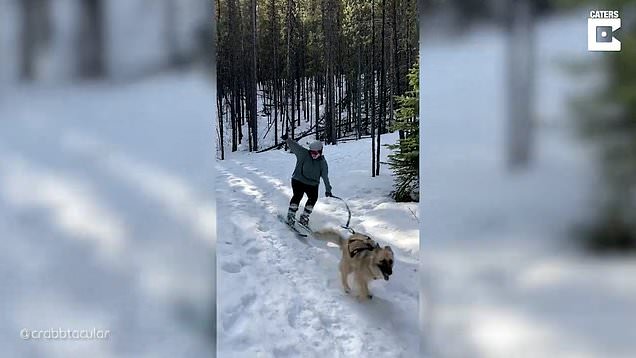 The 27-year-old owner said: ‘There is nothing like skiing, let alone skiing with a dog.

‘We adopted Akela on her first birthday. We didn’t know too much about her past. All we knew is she’d been passed around a few houses and she wouldn’t be passed again.

‘We have always loved travelling but had got into a bit of a rut at home and needed a shake-up.

‘It turned out that Canada was the simplest option for Akela with no quarantine for dogs and minimal hoops.’

The duo ski around three times a week and have even come up with their own creative system.

Ellie added: ‘We use a bungee lead with a padded handle, and I started by racing her on a leash.

‘Once she had the idea I started letting her win the race, the leash would go taught and then she would be pulling me.

‘Lots of praise and encouragement goes a long way. I always make sure that there is some gradient in the trails we choose, so that momentum helps her to pull.’

And it seems Akela not only loves skiing, but other sporting activities too – although, she also enjoys relaxing after an energetic day.

Ellie said: ‘She also loves camping, canoeing and biking – but as soon as she is home, she only wants a snuggle.

‘Like most German shepherds or huskies, Akela is a big, weird goofball.’

Elsewhere in the world of dogs, an ex-racing greyhound with a cheesy grin has found his forever home.

The lifestyle email from Metro.co.uk

Get your need-to-know lifestyle news and features straight to your inbox.