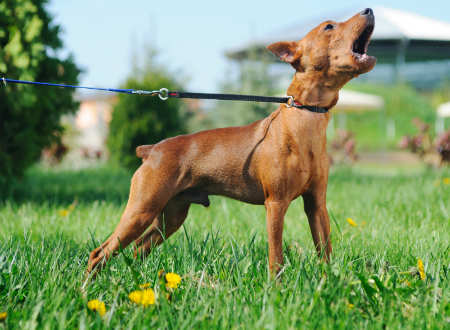 Separation anxiety, weight problems and a tendency to poo on the kitchen floor ... puppies and their owners submit to three months of training-cum-therapy in this new series

‘Being a puppy parent is hard work,” says the narrator in the opening seconds of Puppy School (Channel 4). This pass-the-sickbag sentiment manages to be both gratingly twee and hard to credit. The puppy’s real parent, after all, is not its owner – it’s a dog that gave birth to five others on the same day, before they were all kidnapped.

Still: puppies. An hour of watching them getting trained is bound to be cute, not to say mildly therapeutic, and involve rather less jeopardy than a Bake Off highlights reel. Canine behaviour expert Hannah rattles off the first three rules of Puppy School. “There are no bad dogs,” she says. “And there are no bad owners, and there are no stupid questions.” I very much hoped none of these things would be true. Laura and her daughters live on a farm in Cornwall with a horse, two donkeys, a goat, a variety of ducks and chicks, seven alpacas and a cat. The addition of a small dog should be no hardship for the family, but Laura chose Athena, a Newfoundland puppy that at 12 weeks already weighs 44lb. Athena chases every other animal on the place, hates being left alone and looks like an eight-year-old playing a bear in a school play.

Deepti and Dave from Sheffield acquired Jerry the dachshund puppy when Deepti was undergoing cancer treatment. Jerry’s bark is loud for his size, and he barks all night. Hannah and Jack from Middlesbrough are openly using their yellow lab Reuben as a “practice child”, to the extent that Jack has installed gates at the bottom of the stairs. Reuben, in his adorable way, appears to be hellbent on putting Hannah and Jack off procreation. He is not house-trained, unless someone has trained him to poo on the kitchen floor for the cameras.

No pet parent wants to see their dog in distress, but sometimes animals become nervous or fearful, especially when faced with loud noises, new people or a events, such as Halloween.

Puppy School happens in the grounds of Chatsworth House – three lessons across eight weeks, plus follow-up home visits. There’s no competition, no prizes and, to be honest, not all that much training. Nobody’s dog learns to do a backflip by the end. The real premise of Puppy School is that people acquire puppies for emotional reasons that are also dramatically interesting. Consequently, trainers Hannah, Katie and Oli are quick to attribute any behavioural issues to human psychology, rather than to puppies just being stupid.

“I think Laura might be more anxious than her puppy,” says Oli. I’ve read that Oli is a “pup trainer to the super-rich”, and he certainly has the studied patience of a man used to dealing with the more-money-than-sense crowd, along with an unplaceable accent that sometimes seems to verge on South African, although I gather he is French. In other words, he’s made for TV. As treatment for Laura’s separation anxiety, Oli leaves her in the centre of Chatsworth’s large hedge maze, desperately calling for her dog as it tries to find her. The maze is no match for a determined Newfoundland; Athena bores through the hedge walls like a tank.

I am fascinated by the logistics of Puppy School. For four programmes they needed 12 dogs with owners who would still be reliably useless at puppy training at the three-month mark. How could they know? Beyond that, the show requires a decent spread of unwanted canine behaviour. You can’t have a week where all three dogs tick the “barks when left” box.

By the end of training all three puppies have made some progress (for Athena it’s mostly in the weight department; she’s put on another two stone) and their owners have been on a journey. Along the way the viewer is provided with some basic dog training tips by the experts. In order to keep control of your dog in the park, they suggest that you “be really fun to be around”. Yeah, thanks – if I could manage that, I wouldn’t need a puppy in the first place.

I am not a dog lover. I am a dog owner, which is a different thing. I would not like to give anyone the impression that I am some kind of enthusiast. If nothing else, Puppy School reminds us that puppies don’t spend all day chasing unravelling loo rolls. They also bite children, bark ceaselessly and wreck stuff. But I will happily watch a dachshund puppy run through tall grass for an hour. The fact that it’s not mine makes me even happier.