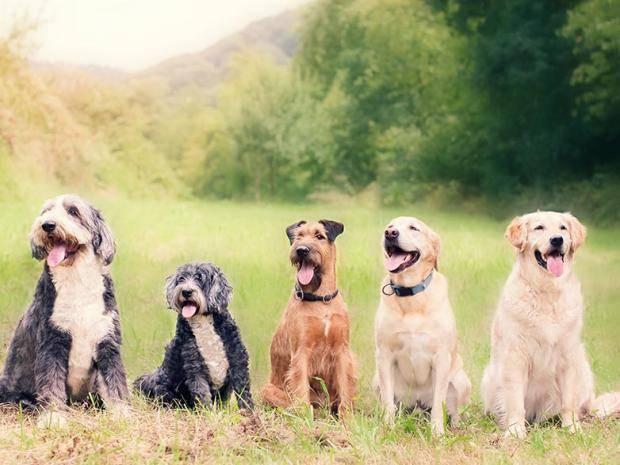 The average dog owner walks their pet 1,000 miles in a year

Puppy born with upside-down paws learning to walk after surgery

Milo had a difficult start to his life. Born with upside-down paws, he was unable to walk and had to rely on a shuffling crawl to move.

Milo was surrendered at 5 weeks old to Oliver and Friends Farm Sanctuary in Luther, Oklahoma , which takes in special-needs animals as part of its mission.

"We weren't sure exactly what was wrong with him when we first took him in," Jennie Hays, the founder and director of the nonprofit organization, told TODAY. "It was obvious he was having difficulties walking, and his front legs were pretty much useless."

Milo moved using his elbows and wristbones, according to Hays, who had the dog checked out by a veterinarian.

(Picture: OkStateEdu / SWNS) ‘Many people will never see a case of it in their whole career.’ Milo awoke to find himself in rigid, front body splints following the life-changing surgery on 9 January 2019.

"My vet knew what was wrong, but it was such a detailed surgery and a rare one that she wasn't comfortable doing it," Hays said. She was referred to Oklahoma State University's Center for Veterinary Health Sciences, where she and Milo met Dr. Erik Clary, an associate professor of surgery and bioethics, on Jan. 8.

"He knew exactly what to do and how to fix it," Hays said.

"It's a very uncommon condition ," Clary explained to TODAY. "I've been doing surgeries for 27 years, and Milo is the third patient I've seen with this. As a surgical specialist, other veterinarians send us cases, usually the odd ones. A specialist is much more likely to see a good number of cases that are odd or whatever else, so the fact that I've only seen three — that tells you that most vets will never see these cases."

Clary was able to determine the problem with Milo almost immediately.

"The first time I saw Milo was in the exam room, with his caretaker holding onto him and his paws pointing towards the ceiling," said Clary. "Just looking at him I knew his elbows were dislocated."

Clary and his team evaluated Milo, who underwent a CT procedure to assess his bone shape and make sure there were no additional deformities. The next day, Milo was taken into surgery, where his elbows were put back in alignment and he was placed in a splint to help him heal.

However, with the advent of modern pain medications and a better understanding of pain control in dogs, most pups experience only minimal discomfort after surgery when all post-surgical recommendations are followed. The risks associated with spaying a dog include pain, infection, dehiscence (opening) of the surgical site and excessive bleeding.

"The idea was that during the healing time, his own body would create scar tissue to hold the joint together," said Clary. The puppy was in the splint for nearly three weeks, which Clary said was a challenge due to Milo's energetic and playful nature.

Since the surgery, Milo has been working through physical therapy and rehab, which has focused on stretching and retraining his muscles, as well as building up new ones.

"He's got some innate inclinations in terms of how to move things, but he was compensating for so long with his disability that we had to untrain and retrain him," Clary explained.

"He can now stand and walk, but it's not like a normal walk," said Hays. "He was so atrophied — he didn't have any neck muscles or shoulder or leg muscles at all in the front half. And because he had never learned to walk normally in his back or his back legs, we're trying to teach him to put his back feet behind him so he has a more natural stance, but his muscles are fighting us every step of the way."

Clary cautioned that "this is not going to be an overnight type of deal where the dog is dysfunctional now and a week later he’s Superdog." However, he added that Milo's "progress has been very good. I've been very pleased. He's got a ways to go but I think he's going to continue to improve."

Clary said it helped that Milo was brought to him at a young age.

"I suspect early on the degree of deformity may not be severe, but the longer those elbows are out of joint, the more rotation can occur," he said. "Certainly if someone sees a puppy with a significant deformity like Milo's they need to see a vet as soon as possible. The sooner, the better."

Milo is continuing his rehab and therapy at the sanctuary, surrounded by other special-needs animals, including deaf pigs and a blind cow.

"I really love the special (animals)," said Hays. "I really wanted to help the ones that nobody really had an interest in helping."