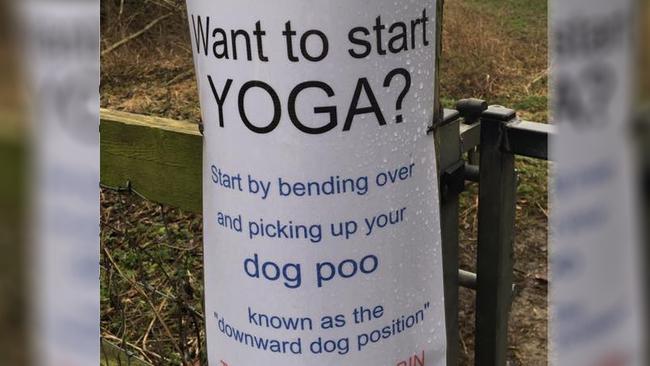 Funny sign asking people to pick up their dog's poo in the UK. Picture: FacebookSource:Facebook

PICKING up after your pooch is just part and parcel with owning a dog, but not everyone is vigilant about cleaning up their pet’s mess.

Things were clearly getting out of hand in the small town of Dullingham in Cambridgeshire, in the south-east of England, because this sign was plastered by a gate on a main footpath in the village. 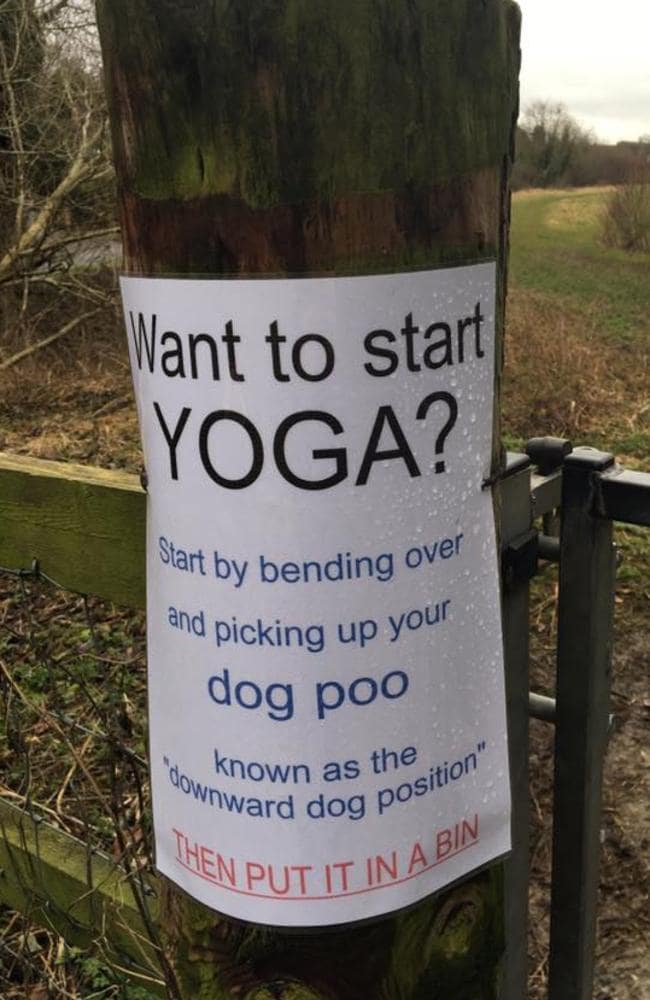 The poster asks: “Want to start YOGA? Start by bending over and picking up your dog poo — known as the “downward dog position” — THEN PUT IT IN A BIN.”

Local resident Julie Murden was walking past the sign, took a picture on her phone and posted it on the Dullingham Village Community Group’s Facebook page.

“This funny notice has appeared on one of our footpaths. Hoping to see more dog walkers in the downward dog position soon!” she wrote.

Ms Murden told the BBC she footpath is normally used by children who attend the local primary school.

“I spotted it and thought it was really humorous with a serious message,” Ms Murden told the BBC. “It is not nice treading in poo.

“What is even worse is some people bag up the poo and then leave it or throw the bag into the hedge.”

She said she was shocked at how popular her post had become online, especially being as the community group has just 333 members.

“I was quite surprised it had so many shares and has apparently reached Dubai and Italy,” Ms Murden said. Ben, a black belt holder in Jujitsu, is undoubtedly a tough, strong man, and a great dad. He’s completely undone, however, when his wife asks him to pick up the dog poo. A gag reflex comes out of nowhere, and he’s left completely incapacitated. It’s left to his 7-year-old daughter to pick up the poo and put it in a bag. Credit: Facebook/JosieGamble