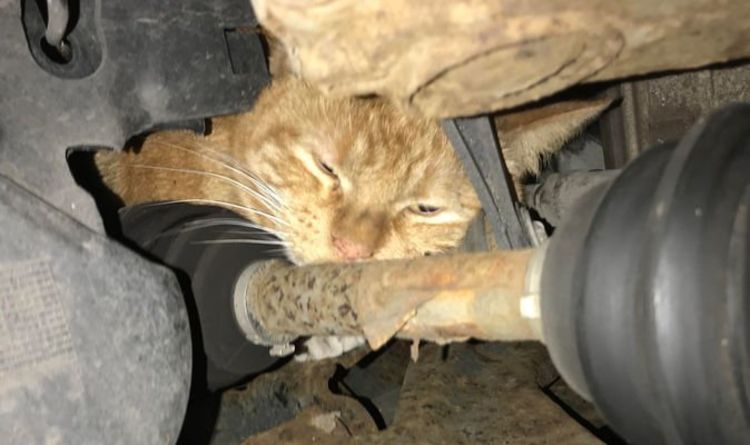 Pet snake cut free after getting trapped under car’s gearstick

Allan, a 1.5 metre corn snake, had been driving to Oldham with its owners for ChristmasA 1.5 metre (5ft) snake named Allan had to be rescued from inside a car after escaping while travelling with its owners over Christmas. The pet corn snake got out of its vivarium as it was travelling with owner Ellie Bond from Nottingham to Oldham to spend the Christmas break with family. Bond frantically searched the car with her partner, Lewis Newton, but, after finding no sign of Allan, she thought he might have fallen from her car on to the motorway.

The couple began pulling apart the car and removing the seats until Newton pulled away the casing near the gear stick, revealing the reptilian escapee. Bond, a 25-year-old supply teacher at Oakwood infant school in Derby, said of the snake: “He is 5ft long and quite chunky so he was properly trapped, and I was worried he would hurt himself trying to get free. We tried using butter to help lubricate the area but he still couldn’t move.

“It was also snowing so was very cold for him – which is also very dangerous for a snake – so I was scared he would die if we could not release him quickly as he had been there for a few hours.”

The fact Allan had eaten a large meal that day also worked against him, trapping him in the car.

After an RSPCA inspector arrived at the scene, Greater Manchester fire and rescue service had to be called to cut the snake free. While the inspector, Angela Paxton-Taylor, held Allan with a damp towel to ensure the temperature of the metal around the reptile did not get too hot, the firefighters cut through a small piece of metal which was enough to allow it to be lifted free.

Paxton-Taylor said: “Along with the fire crews we were able to safely release him and he appeared unharmed – a few scales were missing and he was very cold but we were able to warm him up and he is doing well. “It was awkward as there was me and five firefighters in a Citroen C1 working hard to free Allan but it worked. The fire service who worked brilliantly as a team and were determined and really considerate for the wellbeing of Alan.” Bond said Allan has fully recovered from the ordeal and is now “back to his lazy self”.