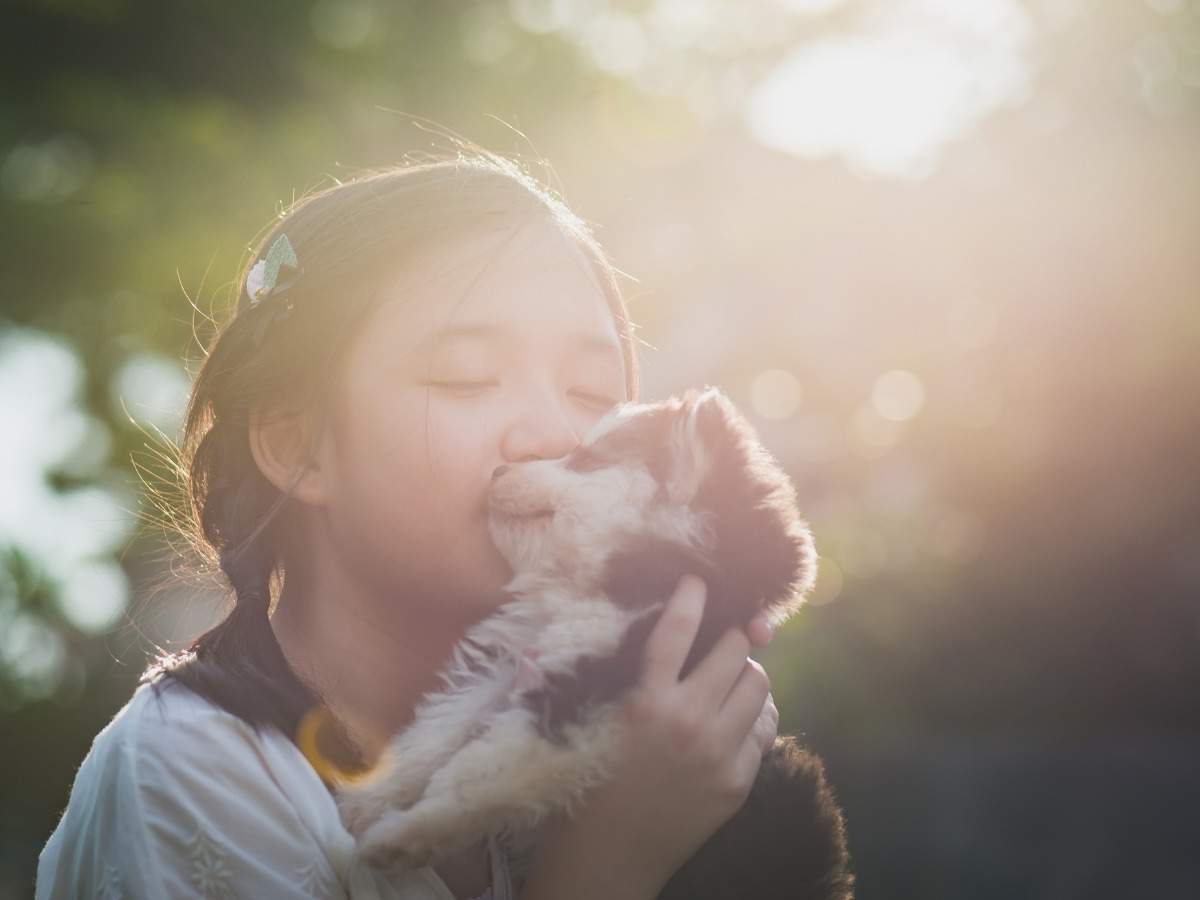 Would you like your kids to be more Fido-friendly?

Hollie Cummins, 30, truly adores her two pomeranian dogs , spending hundreds on providing them with the most lavish lifestyle possible.

So much so, that she actually spends more money on her pooches than she does on her nine-year-old son.

Hollie initially adopted pomeranian puppy Bear as a surprise for her son, despite worrying that getting a dog would be like caring for another child. The mum grew so attached to Bear that she decided to buy him a pal, adopting a second pomeranian, named Beau, just two weeks later, driving more than 11 hours to Bournemouth just to collect the dog from a breeder.

Beau and Bear are now treated to luxurious home comforts, including £400 chaise longue beds, £250 Swarovski crystal collars, and grooming treatments that cost up to £200 a month.

The dogs also get luxury food (chicken and steak, of course, for up to £300 a month) and designer clothes, meaning Hollie spends more money on them than she does on her son, London. In her defence though, Beau and Bear are actually bringing in some income.

The dogs were signed to animal agency Animal Direction last year and have since starred in commercial campaigns, including appearing in a PrettyLittleThing photoshoot modelling a new collection of dog jumpers. Hollie, from Rochdale, said: ‘My son has always been obsessed with dogs and I’d always said no to having one, because it’s like having another child and they need attention all the time.

‘I caved in in the end and surprised London with Bear for his Christmas present – I set off at one in the morning to collect him from a breeder in London because there were no local breeders.

‘We loved Bear so much and decided he needed a brother, so I then drove 11 hours to Bournemouth two weeks later to get Beau – he looked so much like Bear on the ads online so it was meant to be.

‘I chose to get Pomeranians because I’m not one for massive dogs and my house is glam and girly so I thought I needed a cute little dog – and I ended up with two!

‘I’ve got quite a large social media following and the amount of messages I get about them is ridiculous – everyone wants to know their breeders because they want a pom that looks exactly like Beau and Bear.

‘They get birthday presents, have their own little present sacks for Christmas and even at Easter they get their own dog chocolate eggs.

‘They have their own little wardrobe full of at least 100 outfits and I’d say their wardrobe is probably bigger than mine and my son’s.

‘London, Beau and Bear are my three little sons so I try to keep the amount of presents even, but sometimes I do tend to spend a bit more on pampering the dogs.

‘Even though my son does have designer clothes, he’s more often in his school uniform and I see the poms as my little dog models.

Adventure cat loves nothing better than hiking with his canine chums

‘Everybody knows that I’m the crazy girl with two poms!’

The dogs also have their own Instagram with thousands of followers, so are becoming internet celebs deserving of their high-end treatment.

Their photos do attract some backlash from people who think the pups shouldn’t be dressed up, but Hollie believes Bear and Beau love the spotlight.

‘They’re so used to the camera it’s ridiculous and they sit so still, I think it’s because they’ve had a camera in their face since day one,’ Hollie says.

‘They’re such chilled out dogs and behave better than children – my friends come round and say it’s not normal because they let you cradle them like a newborn.

‘I was absolutely over the moon about the PrettyLittleThing campaign because when I set up their Instagram page, people were laughing and saying it was ridiculous.

‘But we’re the ones laughing now because they’re getting paid opportunities and it’s really nice when people go out of their way to like and comment on their pictures.

‘You’ll get people saying dressing them up is cruel but I like them to be warm going out on a walk and you can tell they enjoy it.

‘My son absolutely loves when they get dressed up and always says they look really cute.

‘I know some people say they’re just dogs but I prefer them to humans some days.

‘People say I’m crazy but I love them and they’re basically like my sons – I’d never give them away for the world because they’re too precious!’

Do you have a story to share? Get in touch by emailing [email protected]Metro.co.uk .