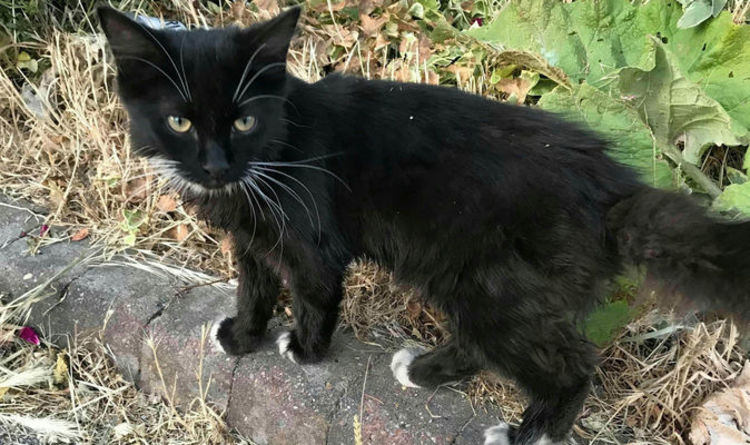 Only the ears of the little Welsh pony were left clear from cloying mud as RSPCA rescuers and firefighters battled to save her from drowning. By the time Puddles was hauled free, her gleaming grey coat had been turned a tarry black. She was also freezing, exhausted and lucky to be alive after spending days trapped in the deadly morass.

Puddle owes her life to a sharp-eyed member of the public who spotted her languishing at the bottom of a deep ditch in Grays, Essex, earlier this week.

An Essex Fire and Rescue Service crew rushed to the scene and firefighters dug a trench and managed to attach a harness around the 15 year old pony, who measures 11 hands or 3ft 8ins at the shoulders.

They then managed to haul her gently from the neck-deep, murky waters.

Once free, Puddles was given immediate veterinary treatment – and a bath. The RSPCA is now trying to tracer her owners.

RSPCA Inspector Caroline Richardson said today: “It’s amazing that she was spotted as she was absolutely covered head to toe in mud and was neck-high in muddy water. You could just see her ears, which were the only part of her that were still grey.

“It’s total chance that she was found and she was very lucky to have been spotted.

“She was freezing cold, shivering and clearly exhausted. We believe she may have been stuck in the ditch for days and, with the weather having turned so cold and wet, I don’t think she’d have survived much longer. She’s a very lucky little pony.”

Puddles is believed to have been straying in the area where she was rescued for the past three months. She was not microchipped and RSPCA is hoping to reunite her with the owners.

Puddles the muddy pony waits for a bath after ditch ordeal (Image: RSPCA)

Inspector Richardson added: “I’d like to say a big thank you to the fire crew who did a great job retrieving her from the mud and, although she was a little stiff and terrified, incredibly she came out unharmed.

“She’s now having a well-deserved rest at the vets and will be cared for until we can trace her owners.

“ We would love to find Puddles’s owner as she has clearly been on the run for quite some time. However, if no one comes forward to claim her then we’ll find her a loving new home.”

Anyone who recognises Puddles or believes her to belong to them should contact the RSPCA’s appeal line on 0300 123 8018.