Metro Lifeline: A medical detection dog gave us our lives back

When the idea of having a medical detection dog coming to live with me and my son, Jamie, was first floated by a teacher, I have to admit – I wasn’t too sure. I’d never grown up with dogs , and I had my hands full being Jamie’s sole full-time carer – did I really need something else to look after? But as soon as Richmond, our bouncy Labrador cross Golden Retriever, came home with us, he started to make our lives better in ways I could never have imagined.

Just before Jamie turned two, he was diagnosed with type 1 diabetes .

He’d been very ill, so finding out what was wrong with him was something of a relief. Though not curable, having type 1 diabetes is something that’s often manageable with an injection a day.

‘We can cope with that,’ I thought to myself. Soon, it became clear that this wasn’t the case.

Jamie’s blood sugar levels were never regulated, constantly being too high or too low. At age three, he had to stay in hospital for eight-and-a-half months for specialists to figure out what the issue was. 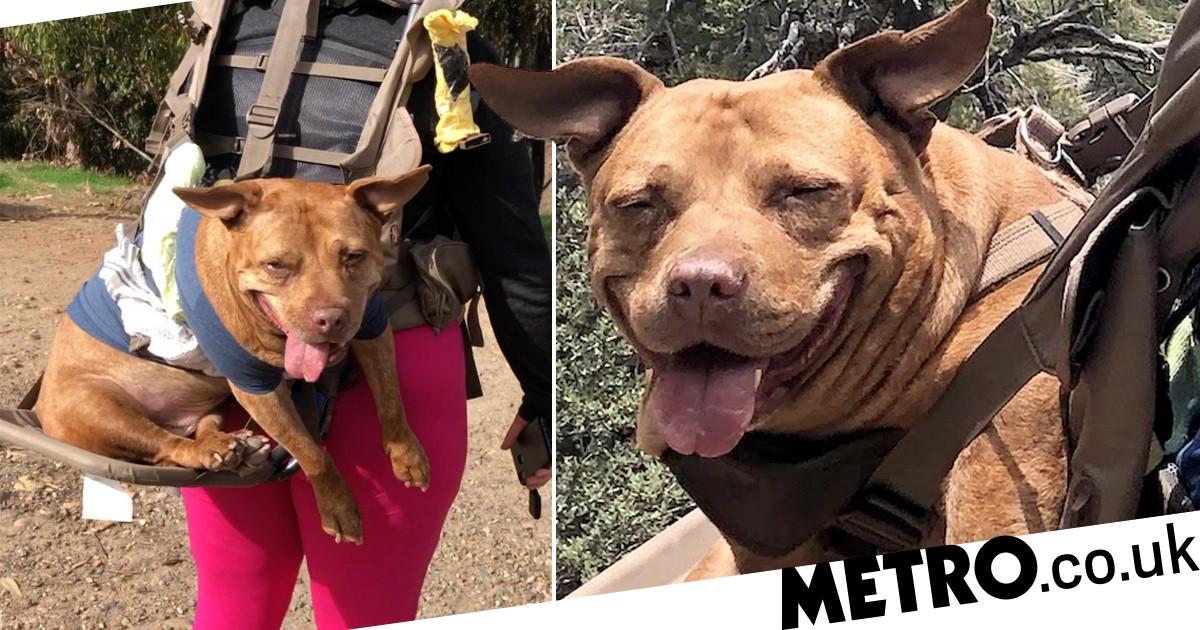 Ultimately, Jamie was diagnosed with insulin binding and releasing antibodies – a rare condition that means his body stores his insulin and doesn’t send it where it needs to go, making his blood sugar extremely high.

But if he got stressed, upset, excited, or experienced any sort of high emotion, his body would then release all stored insulin, causing his blood sugar to be extremely low.

A severe reading in either direction is a serious cause for concern. Low blood sugars can cause seizures, comas and possible death, while high blood sugars can also cause life-threatening complications, such as diabetic ketoacidosis (DKA) – a condition caused by the body needing to break down fat as a source of energy, which can lead to a diabetic coma.

We left the hospital knowing that he’d need constant care. Jamie’s blood sugars needed to be tested between every 15 minutes and every two hours, 24 hours a day.

Someone had to be awake and alert with him at all times, so there was a rotation of night nurses at home to stay with him overnight, as well as nurses by his side at school.

But checking his levels at these regular intervals wasn’t always enough – he showed no symptoms of being high and low. He wasn’t symptomatic until it was almost too late to give treatment and we’d have to call ambulances between three and five times a week.

If Jamie gets too high or low, he needs IV treatments – dextrose to raise his levels, and insulin and IV fluids to bring them down.

Luckily, I had family close by – my mum or brother would be on hand to help with Jamie’s care – but apart from the nurses, it all fell to me.

Having a nurse – often someone he’d never met before – awake in his room overnight wasn’t the most ideal situation, but having staff to check Jamie’s levels allowed me to sleep and get the rest I needed to be an active mum for him in the daytime.

We could go to the park, and on day trips, albeit with quite a bit of planning. By the time Jamie reached 10, things were a little less hectic; I learned more about his triggers and how to stop them.

However, when Jamie was 11, we found out that funding for Jamie’s night nurses was being taken away. I was terrified of what that’d mean for us.

When my son was very young, I had no energy to do anything. I wouldn’t like to say I was depressed, but the exhaustion was so unrelenting that I felt completely empty.

‘I didn’t even know such dogs existed’ (Picture: Yvonne Nicholson)It meant I wasn’t able to work either, but I was desperate to put my time to good use, so eventually decided to volunteer for a charity.

Sometimes, I would have to choose whether to wash the pots or start organising Jamie’s medicine. Obviously, the medicine took priority – I simply didn’t even have the strength to do both.

It was daunting, the thought of going back to those times when all energy would be going back into looking after Jamie completely.

As soon as we got the heads-up that we were losing the nurses, Jamie’s headteacher stepped in with a strong recommendation that we look into getting a medical detection dog.

She’d seen a documentary on TV about them and their ability to pick up on illness and changes in humans’ bodies and raise an alarm about it. She suggested it as something that’d be helpful for Jamie.

Though I wasn’t sure I’d be able to manage a dog in the house, if Jamie had a chance of living a better life, I decided the extra work would be worth it.

We applied, and got accepted pretty quickly. It wasn’t plain sailing, though – training a dog to get used to Jamie was tricky.

Part of his medical condition has caused issues with memory recall. After about 15 minutes of training with the dog, Jamie would remember 20% of it. It meant that , the commands were sometimes difficult for him and he ended up getting stressed by forgetting what he should be saying.

We got to a point where we had to admit defeat – it just wasn’t working.

The one hope of a lifeline and being able to live again was about to be taken away, and there wasn’t any way I could fix it. I couldn’t step in and learn commands for Jamie – it was all down to his connection with the dog.

But the trainers and a manager at Medical Detection Dogs actually came up with the idea of socialising a puppy ourselves.

Usually, the dog would reach a family at around two years old, having already had a year’s worth of preparation. But we were trying something completely new, by taking in the puppy ourselves so that Jamie and the dog could learn commands together, at the same pace.

We walked into the centre and quickly saw a cheeky puppy – he stole a bowl and ran out of the office, and it really made Jamie laugh. Clearly, this one was ours.

At home, Richmond settled down on the floor nicely. I said goodbye to the trainer outside and when I came back he was snuggled into Jamie on the couch. It was an instant connection, completely different from his relationships with other dogs we’d tried.

Jamie and Richmond had an instant connection, completely different from his relationships with other dogs we’d tried

From then on, they’ve been inseparable.

It helped that Richmond was a young puppy. Jamie wasn’t connecting with other dogs because they were older, trained and well-behaved. But Richmond was a naughty one-year-old that was figuring things out, just as we were!

Seeing their relationship grow has been amazing. Jamie struggled with making human friends, so there was the thought that he might never click with a dog.

He’s completely changed our lives. The night before Richmond started alerting properly, I was still testing Jamie every three hours throughout the night with a needle prick to his finger.

Now, I’ll test Jamie once before bed around 11pm and that’ll be all until the morning, apart from any alerts that Richmond gives.

If there’s a worry that Jamie will take a turn at night, Richmond will bark loud enough for me to hear from Jamie’s room. But during the day, he’ll do anything to get my attention. He’ll come and stare intensely – and if that’s ignored, he’ll paw at me to get me to look.

If I’m in a different room to Jamie, Richmond often brings me his test kit when he detects a change in his levels, essentially saying ‘please use this’. It’s amazing.

Richmond has been with us for two and a half years now. Jamie’s now 16 and medically, he’s so much better. Obviously, Richmond can’t stop Jamie from fluctuating but because he raises an alarm before his levels hit a low point, 90% of the time I’ll give him his treatment, and we’ll be fine.

Jamie doesn’t have these scary lows that probably caused the memory problems and brain damage any more, and he has the simple privacy of his own bedroom, without random nurses with him 24/7 – just his dog.

I’d hoped that having a medical detection dog would make Jamie’s life easier, but I didn’t expect the way Richmond would change my life as well.

Throughout the years, I’ve turned to comfort eating and reached sizes that I didn’t want to be. In the last year, I’ve started running and lost four and a half stone and I’ve signed up for three marathons. It’s only because of Richmond that I have that time to myself to train, as it’s now an option for me to have someone watch Jamie for a couple of hours.

Jamie and I have always been close, but now I have the energy to actually play with him, our relationship is better than ever. He’d often feel that my constant tiredness was his fault, but now there’s none of that guilt.

Metro.co.uk Lifeline: I train dogs to sniff out deadly diseases

‘We have to mimic being the client essentially, which is the most effective way for the dog to learn.’ (Picture: Simmy Moore)‘It’s also a challenge for the dog because it’s a change,’ he adds.

Richmond has given both me and my son the chance to live – I couldn’t be more grateful that he’s a part of our family.

As told to Nicole Vassell

MORE: How to join Alexandra Burke and Pete Wiicks on our charity walk this June