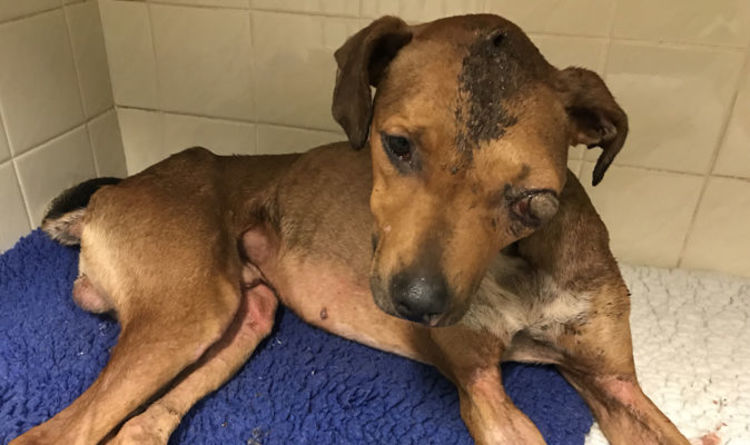 The emaciated pet was so sick he could hardly stand while his face was ravaged by excruciating mange.

Abandoned in the countryside, the young one year old bull dog was found by a passerby who stayed by his side until the animal welfare charity arrived to take him to a vets.

Sadly, the pet was in such a pitiful condition that he was put to sleep to end his suffering.

RSPCA Inspector David McAdam said the bulldog was suffering some of the worst health problems he has ever witnessed when the pet was found in a remote area of countryside near Blidworth, Nottinghamshire, last week.

Speaking today, the inspector described the horrendous condition of the dog as the charity released a series of pictures taken shortly before the pet was put to sleep.

"This was a despicable act,” said Inspector McAdam. “The poor dog was left in the middle of nowhere in such a state and was totally helpless and defenceless.

“His condition was nothing short of appalling and the vet said he had been in a suffering state for at least two months.

“He was unable to stand up he was so weak. He had a chronic skin condition and was severely underweight, had cherry eyes - where the eyelid swells up - and a prolapsed penis caused by infection.

“It is so upsetting to think of the pain he must have endured during those months which was completely unnecessary."

There are never excuses for abandoning an animal, says the RSPCA. Its experts are always available to provide help and adviice.

"I am just grateful that a kind member of the public found the dog and showed him some compassion in his last hours,” added Inspector McAdam.

The animal welfare charity is appealing for information about the dog who was found in Ricket Lane, Blidworth, on September 30 at around 3.30pm. Anyone with information should contact the charity’s appeal line on 0300 123 8018.