Dog owners have been warned about the outbreak of a terrifying flesh-eating disease.

Alabama Rot affects dogs of all types and ages and thrives in cold, wet wintry weather when the ground is sodden where pets are taken for walks.

Five more dogs have died after contracting the disease in the UK.

David Walker, the UK’s leading expert, described the latest deaths as ‘sad’ and warned ‘We are now in the time of year when cases are most common.

‘Further confirmed cases mean it is understandably very worrying for dog owners, however, this disease is still very rare, so we’re advising owners to remain calm but vigilant, and seek advice from their local vet if their dog develops unexplained skin lesions.’

INTERESTING FACT ABOUT YOUR PET: Stray dogs in Russia have learned how to ride the complex subway system, and get off at specific stops in search of food.

Since the disease reached Britain from America in 2012, the highest number of deaths have been in Greater Manchester, Dorset and the New Forest in Hampshire. But it’s also been known to strike as far away as Devon, the Lake District, the Midlands, Wales, Scotland and Ireland. News of the latest deaths follow similar fatalities in Gloucestershire and Westbury, Wiltshire.

Vets are desperately searching for a cure for Alabama Rot, which has killed scores of dogs, with the death rate soaring year on year. 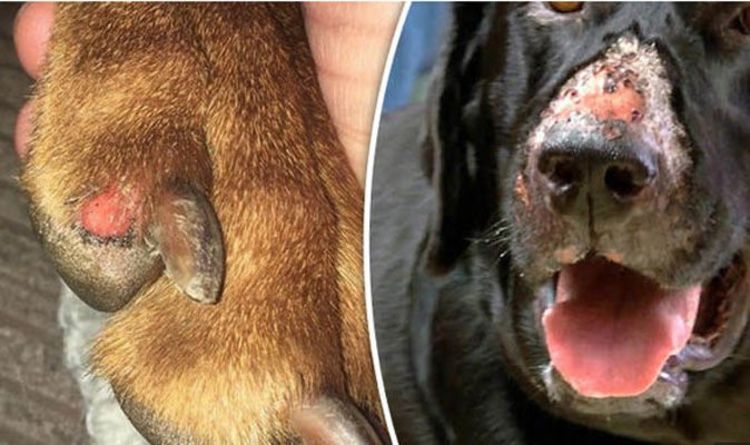 Another vet, Dr Ian Hopkins, said ‘The best advice is to continue enjoying exercising your dog but always be mindful of certain symptoms which may indicate a nasty disease such as Alabama Rot. These can include lethargy, vomiting and maybe your dog is drinking more than usual.

‘With Alabama Rot, the dog will often have skin lesions or ulcers – in the mouth, on the tongue and lower limbs including feet are common place.

‘However, the lesions are not always present and in the case we have just dealt with, there were no sign of any lesions at all.

‘It affects all types of dogs of all ages which therefore makes it a matter of concern for all owners.’

London’s Royal Veterinary College say the fatality rate is high, with fewer than one in five dogs surviving. All breeds are at risk, but those which have been affected most include Labradors, English Springer Spaniels, Cocker Spaniels, Whippets, Flatcoated Retrievers, Hungarian Vizlas, and Border Collies.
Tags: disease, news, dog, rot, wiltshire, year, vet, rate, cocker, vizlas,