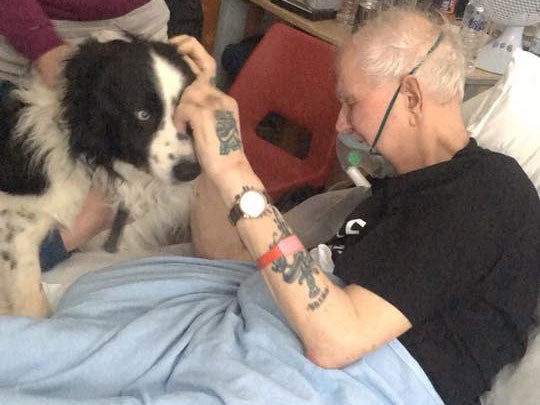 A tiny terrier is recovering in an animal hospital after her face was almost ripped off (Image: SWNS)

Patterdale terrier Snickers was dumped in a bush, close to death, after her cruel owners used her for illegal badger baiting.

RSPCA vets nursed the frightened dog back to health and treated her horrific infected injuries and bite marks, after she was found in Smallfield, Surrey, earlier this year.

Veterinary director Caroline Allen said: "Poor Snickers had a number of really nasty wounds, some of which were very deep and were infected.

"We had to clean and flush the wounds, treat the infection and then we could start closing them up.

"She was very weak and in poor condition, and was covered in older scars too so it looks as though she's been used for badger baiting for some time."

In the last three years, the RSPCA has recorded 3,500 instances of wild animals used for fighting, mutilation and 'trapping'.

RSPCA inspector Kate Fletcher said: "Snickers must have been in so much pain but she was still wagging her tail when I collected her.

"She was in a horrific state and it was clear to me that she'd been used for something horrendous like badger baiting.

"This is where a dog is sent into a badger sett to flush out the badger and attack it, for the handler to then dig the badger out of the sett and shoot it."

The terrier is wagging her tail again - and is now looking for a loving new home.

After six weeks of treatment and rehabilitation, Snickers has now been moved to the RSPCA's South Godstone Animal Centre, in Surrey.

Manager Darren Parrish said: "This little dog has a cheeky personality and playful nature, and has already stolen the hearts of many staff members and volunteers at the centre.

"Snickers has so much love to give and despite knowing only cruelty in her short life."

Despite an RSPCA investigation and appeal for information, Snickers' previous owners were not traced.

Chief Inspector Will Mitchell said: "Poor Snickers is a prime example of the unimaginable cruelty inflicted not only on the wild animals themselves, but also the dogs involved.

"We've investigated large gangs of men who rampage throughout the countryside with their dogs killing whatever they come across: badgers, foxes, deer and hare."

Inspector Mitchell said that these 'merciless' attacks are happenings throughout the countryside and suburbs of the UK.

The 'badger diggers' behind the baiting operate in the early hours to avoid suspicion and often use DIY home treatments for the dogs.

Inspector Fletcher added: "Given the degree of infection she could have been straying or been dumped in the area for some time - many people are unaware of this dark world that exists."