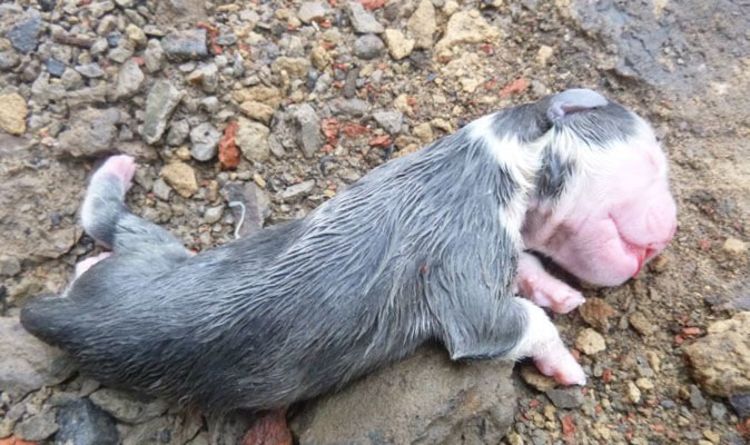 Lucky duck survived being shot at with blowdart (Image: RSPCA)

Miraculously, the male mallard was still able to waddle around after being shot with a gruesome blow dart. The four-inch metal dart went straight through the bird’s neck but without striking a major artery or causing a deadly infection. Now the duck has been released back on his riverbankl after leading animal rescuers on a wild duck chase.

For almost week, the flighty wildfowl avoided the best intentions of RSPCA officers after he was spotted with the dart protruding through his neck while swimming on the River Don near Oxspring, Barnsley.

Finally, it was the duck’s love of being fed by an animal lover that led to him being captured, given a veterinary once-over and finally released back in the wild after a week’s rehabilitation.

Images released by the RSPCA today reveal how lucky the duck was to survive. The metal dart that went through the bird’s neck was equipped with a sharp tip as well as plastic fletching allowing it to be fired by a blowpipe or air weapon.

As the RSPCA launched an investigation into the mindless act of animal cruelty, the charity praised the un-named bird lover who helped save the duck.

Duck was lucky to survive being shot in neck with four inch metal blowdart (Image: RSPCA)

Inspector Sara Jordan said: “Almost every RSPCA officer in our area had a go at catching him but as he was still very active, and able to fly and swim, every time we tried, he managed to escape.

“We concocted a plan with a local animal lover who feeds the ducks and left a net and box with them.

“We got a call from them the other day to say the mallard had turned up wanting some food and they were able to catch him and keep him safe until we got there.

“Their dedication to helping this duck meant we were able to get him to the vets to have the dart removed, give him a few days of antibiotics and bed and board, and get him back on the river, where he belongs.”

Footage released by the charity today shows how the duck took to the water with his friends once he had been fully recuperated.

Now the RSCPA’s efforts are being focussed on catching the culprit who came within a fraction of an inch of killing the innocent creature.

Inspector Jordan added: “This was a real team effort and we’re very glad that there is a happy ending for this duck, who was very lucky not to have been more badly injured by this incident.

“Clearly he has been targeted by someone with a great deal less love and respect for our wildlife than the kind-hearted and determined member of the public who helped us here.

“We would ask that if anyone has specific details about who was responsible, or saw anything that might help, to please call us.”

Anyone with information about the incident is urged to call the RSPCA’s confidential appeal line on 0300 123 8018.